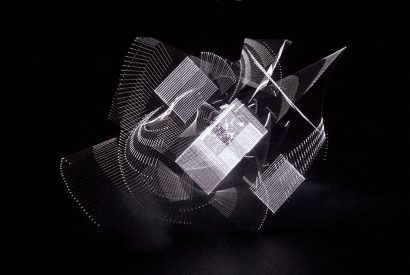 Robert Henke (a.k.a. Monolake) is an artist working in the fields of audiovisual installation, music and performance. Coming from a strong engineering background, Henke is fascinated by the beauty of technical objects and developing his own instruments and algorithms is an integral part of his creative process. For the past few years, he has been exploring the artistic usage of high power lasers in his installations and performances. Robert Henke is also one of the main creators of the music software Ableton Live, which since its invention in 1999 became the standard tool for electronic music production and completely redefined the performance practice of electronic music. His installations, performances and concerts have been presented at Tate Modern London, the Centre Pompidou Paris, Le Lieu Unique Nantes, PS-1 New York, MUDAM Luxembourg, MAK Vienna, the Art Gallery of New South Wales in Australia, KW Institute for Contemporary Art, Berlin, STRP Biennale Eindhoven, and on countless festivals.

Lumière II performance explores the limits of what can be done with lasers, pushing the medium to the extreme and playing with its very own properties to create previously unseen images of excessive brightness or near complete darkness, pure white or colors impossible to achieve with video, shapes and movements between boldness and complex elegance. A constantly refined piece of software written by the artist himself makes it possible to compose in a process that always links sound and vision. Sound is vision is sound, treated as one absolute unity. Lumière II is a performance on the edge of concert and visual arts. It is the second iteration of a long term exploration of a commonly underrated medium, an ongoing work in progress with every performance representing a unique snapshot of the current state.
Lumière I and II has been presented more than 50 times in Europe, Asia, Africa, Australia, North- and South America. The project has been staged in 16th-century theatres in Italy, in amazing concert halls all around the globe, in vast industrial spaces, and in the yard of a castle high up on a hill in Portugal. It has been acclaimed as a highlight of the most significant festivals for audio visual performance world wide, including CTM, MUTEK, STRP, Unsound, and many more.