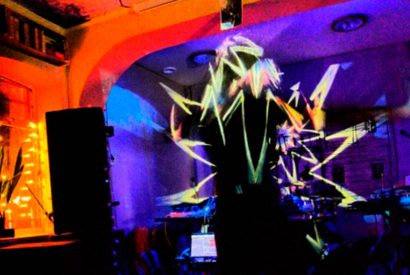 That Black is a project of the Russian/Ukrainian musician and electronic instrument builder Vlad Kreimer from Donetsk. In recent years, he has been attracted by a free Indian school of playing the vertical homemade bow instrument. He is also experienced in electronics and often uses the analogue sound technologies (controllable radiofrequency, old synthesizers, and drum machines). “This setup is designed and created by myself and is called SOUDABO (Sound, Dance, Body). It’s a system of analogue synthesis controlled by position and motion of the body. Through a system of accelerometers and other sensors using the effects of gravity and inertia, the body’s plastics turn into a musical score.” During his performances, he often uses voice and technique of spontaneous dancing.